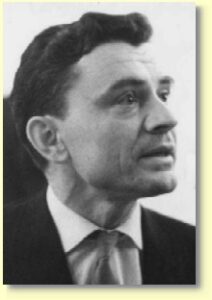 Włodzimierz Kołos was born in 1928 in Pinsk, Belorussia, to the family of a Polish railway clerk. After World War II he quickly completed high-school education and entered the University of Poznan to study chemistry and physics. Upon receiving the M.Sc. in Chemistry in 1950, he moved to Warsaw and began graduate studies in theoretical physics under the supervision of Leopold Infeld. His research topic was the influence of hindered rotation on neutron scattering off small organic molecules. He completed his thesis in two years and started an independent research in the field of quantum chemistry – an entirely new research area in Poland at that time.

After a brief interest in extending Thomas-Fermi theory to molecules, Kołos became one of the first researchers to tackle the problem of the electron correlation in organic molecules. His early papers on the correlation of electronic motion in the ethylene and benzene molecules contained important ideas on this subject, later developed further by himself and others. In 1958 he went to Robert Mulliken’s Laboratory of Molecular Structure and Spectra at the University of Chicago. These were the times when the foundations of computational quantum chemistry were laid down and Mulliken’s Laboratory played a major role in this endeavor.

In Chicago Kołos developed a unique computer program which solved the electronic Schrödinger equation for the hydrogen molecule to spectroscopic accuracy. Initially he employed the explicitly correlated basis introduced earlier by James and Coolidge. Later this basis was improved and generalized by himself and Lutoslaw Wolniewicz. In the early 1960s Kołos and Wolniewicz computed several corrections to the conventional Born-Oppenheimer energy of the hydrogen molecule, including the adiabatic, non-adiabatic, and relativistic effects. These were seminal theoretical developments never before attempted for any molecule. This work resulted in theoretically predicted spectra of unprecedented accuracy. In a famous development Gerhard Herzberg had to revise his experimental value of the dissociation energy of H_2 after significant disagreement with the theoretical value published by Kołos and Wolniewicz had been found. This was the first demonstration that quantum chemists can solve the Schr”odinger equation for a molecule with an accuracy which can surpass the best spectroscopic measurements.

Collaborating with Wolniewicz and others Kołos improved the theoretical value of the dissociation energy several times. These improvements usually inspired new, increasingly sophisticated determinations of the experimental value. He also devoted considerable effort to the study of various spectroscopic properties of excited states of the hydrogen molecule obtaining numerous accurate potential energy curves which have been invaluable not only in interpreting spectroscopic experiments, but also in other fields of science.

Although Kołos continued theoretical research on the hydrogen molecule until the end of his life, his scientific interests were very broad, and he was active in many other areas. He made important theoretical contributions to the theory of intermolecular forces and founded a strong research group in this field in Warsaw. Together with his collaborators from Warsaw, he studied the foundations of the perturbation theory of intermolecular forces and contributed to the development of the current formulation of the symmetry-adapted perturbation theory.
He was also one of the pioneers in the field of ab initio studies of the nonadditivity of intermolecular forces. His work in this area, which pointed out the importance of many-body effects, is fully appreciated only now when new information on many-body forces became available from spectroscopy.

In the 1980s Kołos was involved in theoretical studies of molecular effects in the beta decay of molecular and solid tritium by obtaining data critically needed to extract the electron neutrino mass from molecular tritium beta decay measurements. These data are still utilized by all current neutrino-mass experiments.

Another subject of his research was muon-catalyzed fusion. He became interested in this subject in the late 1950s and his first calculation of the fusion rate was published in a 1960 paper co-authored by Clemens Roothaan and Robert Sack. Renewed interest in this field arose in the 1980s when new experiments indicated that a single muon can catalyze hundreds of fusion reactions. With collaborators from Warsaw and Gainesville, Kołos performed extremely accurate nonadiabatic calculations for muonic molecular ions including not only the Coulombic but also the strong nuclear force acting between the tritium and deuterium nuclei. This work established important theoretical limits on the possible yield of muonic catalysis and contributed significantly to our understanding of this phenomenon.

Kołos’s papers have been widely known and cited. One of his papers, published with Wolniewicz in the Journal of Chemical Physics in 1965, was featured as a Citation Classic in the Current Contents. Another article, published in 1963 also with Wolniewicz, was listed as one of the one hundred most cited articles which appeared in the Reviews of Modern Physics.

His achievements were widely recognized by the scientific community. In 1967 he became the first recipient of the Annual Medal of the International Academy of Quantum Molecular Sciences and later, in 1988, he became a member of this Academy. In 1969 he was elected to the Polish Academy of Sciences. His other distinctions include the Alexander von Humboldt Award, the Medal of the Israeli Academy of Sciences, and the Copernicus Medal. In 1992 he received an honorary doctorate from his Alma Mater: Adam Mickiewicz University of Poznan.

Włodzimierz Kołos died of cancer on June 3, 1996. His brave fight with the disease lasted for over one year. During this extremely difficult time his courage and dignity remained an inspiration to his friends. He is missed very much not only as a scientific and moral authority, but also for his wonderful personality and warmth.
His premature death left those who knew and admired him in a deep sense of loss.